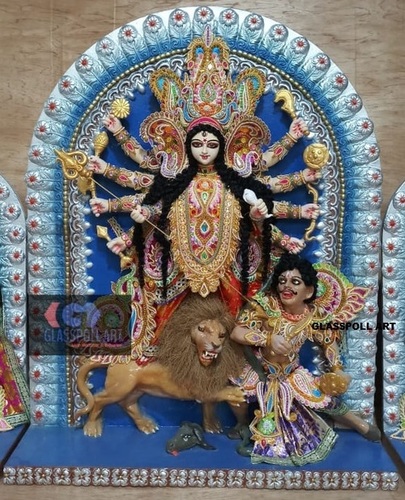 Maa Durga, the only Goddess of Power and Shakti,is the most important Goddess of the Hindus. Goddess Durga Idol was speciallycreated to fight against negative power and evil demon like Mahishasura. Thetrinity of Brahma, Vishnu, and Shiva came together and create a powerful femalewith ten arms to eliminate the evil power from the earth. Durga has different names,personas, and facets.

According to Hindu mythology, the Goddess is theincarnation as the all-powerful one with the combined power of all divinebeings. As Mahishasuramardini or Shakti, she is the destroyer of evil power. Thetrinity gives power to her with ten arms carrying powerful tools to destroy the demon like Mahishasura. Most importantly, as Kali, she turns black as thenight and omnipotent, terrible in rage, with just a string of skulls as hergarland and her only garb.

According to Hindu belief, Durga Statue is a signof power and it destroys negative power from your home. Often we see people aredecorating their homes with beautiful Fiber Durga Statue. Especially, peoplewho live abroad like the USA, Canada, Australia, and Singapore mostly preferFiber Durga Idol as home dcor. Undoubtedly, a Fiber Durga Murty or Wall Panelat the entrance of your house can surely increase the beautification.Fiberglass statues are high-quality and made with lightweight materials as well.

Glasspoll Art is a leading exporter of Fiber DurgaIdol with more than 15+ years of experience. They have an extensivedistribution network overseas and a spacious warehousing facility thatfacilitates timely delivery of the products. They have been creating FiberglassStatues, Sculptures, Planters with 100% success rates and always maintain completecustomer satisfaction.

The company has a great reputation in overseasmarket and they have been exporting Hindu Goddess to overseas places over theyears at affordable rates. Not only that, they professionally managed by theirexperienced and technically skilled professionals to ensure error-freeproduction in every manufacturing stage.